on August 03, 2012
To all my rakhi brothers out there, those I had tied the rakhi many, many years ago, Happy Raksha Bandhan to you all! 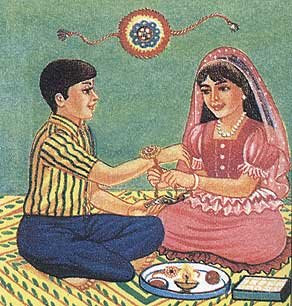 Errol Johnson, if you are reading this, Happy Raksha Bandhan to you, brother!  You are the first brother I tied rakhi to.  We haven't met for a long, long time.  Hope you are doing well with sister-in-law and your children.

Since I grew up without a brother (I only have a younger sister), I have wanted to have a brother for the longest time.  Before Sahaj, the male friends who treated me like a 'younger sister' had ulterior motives.  So, when I came into Sahaj, and was introduced this ceremony to me, I was overjoyed!  On the first Raksha Bandhan Ceremony, I think I tied rakhis to many, many brothers.

Then I found out, that many people do not understand the true beauty of Raksha Bandhan.  Some brothers whom I had tied rakhi, just treated it like another ceremony.  But I was pretty lucky, that I have some brothers, who really treated me like a little sister and truly looked after me!  I find this more in Indian brothers, like Indians from India.  They are the ones who truly appreciate this relationship.

I remember in 2003, I travelled to Delhi, India with a rakhi brother from India.  He was working in Malaysia at that time.  When we arrived at the airport, we had to go through different immigration lanes, for he has Indian Passport and me a foreigner.  He was out in no time, but unfortunately for me, the Immigration officers decided to open my bags and see what I have in there.  It was quite embarrassing because I wasn't expecting this at all and had packed all my undergarments at the top.  The officer was happily exploring my bag and exposing all my things.

The rakhi brother who was already out of the immigration and already out in the arrival hall, came back inside when he saw this, and spoke to the officer in Hindi, that I am his sister, why are you opening her bags?   That was when the officer decided to let me go and phew, what a relieve!  The rakhi brother also helped me to pack the bags, zipped it out, asked me whether I am ok, and helped me to take the bag out. That was when I realised the power of the rakhi string that I tied on this rakhi brother.

When he went back to India, he still deliver presents to all his rakhi sisters.  My sister-in-law was so sweet and chose a sari for me, for one Raksha Bandhan.

Another Indian brother who lives in Malaysia always have a soft spot for me.

Another local Malaysian rakhi brother would always take me out for lunch and was very generous.

I am very lucky and blessed to be in Sahaja Yoga and although I do not have a blood brother, I have more genuine brothers and sisters in Sahaj.

All these years, I was only thinking of making rakhi string and getting presents from the rakhi brother.  This year, I have to help my husband to buy presents for his rakhi sisters.  And I am now a sister-in-law to some rakhi sisters of his.  Wow!