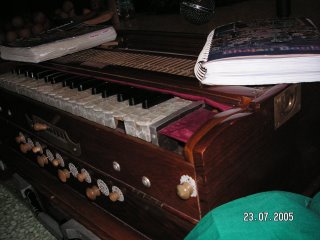 Shri Mataji has blessed me with the ability to play by ear. I didn't realised how much I have taken that gift for granted until I have to teach non-musical students (students who were not expose to music much). I found myself trying so hard to explain to them how to play the harmonium according to the timing, the beat of the bhajans.

I can still remember the first time I played the harmonium for the collective. The week before, Lat has told me to prepare 3 bhajans (I can choose any bhajans) for the following week collective. The whole week, I was practising the bhajans, singing in the shower, singing while driving, practising on the piano (I don't have a harmonium yet at that time). I was so nervous that I have written down note by note on my bhajan book. When it was my turn to play (took turns with Seetha), my fingers were shaking so hard, my eyes were glued to the bhajan book, and my heart was pumping so hard that I thought it was coming out through my mouth. After that, my hands were sweating cold sweat. I made some mistakes and I was so obsessed with it.

By the blessings of Shri Mataji, my playing has improved through time. What happened was I realised that unless and until I surrender the playing to Shri Mataji and be thoughtlessly aware while playing, I cannot play at all. Still at times, when I get extra nervous, I cannot play.

I still don't know how to play the harmonium the Indian classical way, which I really want to learn. I think once I learn that, then I will be confident enough to teach it to the others. Because now, I feel at times I am teaching my students to be dependent on notes (the Western classical music style), especially those who don't know how to play by ear. Once they rely too much on the notes, the playing won't be spontaneous. I really would like to teach people to play by ear, but I don't know how like what is the technique used. So, once I learn to play the Indian classical harmonium, then I will feel comfortable enough to teach others.

After the completion of my ACCA (professional accountancy exams) next year, I really hope to be able to learn the Indian classical harmonium.

hehe I had the same experience the first time to play harmonium for the collective! a bit nervous. In Sahaj music & bhajan, we can only play by heart, not by mind. I start with playing by ears first because I didn't familiar with the bhajan songs at all. I did some mistakes in the begining to the extent I mixed up some bahajn songs. e.g. when Katya asked me to play "Jay Jay Bhavani", I started the music with "Jay Ganesh Jay Ganesh." hahaha....luckily it happened not in performance and local pujas....later on, after more listening and practice, i feel more comfortable and natural and really enjoy for being the pure instrument for Shri Mataji. it is thoughtless. You can't play if you are "thinking".

I know that they do have notation for harmonium in indian classical style but in a more structured pattern with decorative notes. haha...sometimes, I will try to inmitate but it is not easy....the real indian harmonium style is quite similar to tabla playing under the inidan music system. I saw a Russian yogini playing harmonium in interntaional pujas and the movement of fingers actually like she was playing tabla. This did give me some inspiration.

Also, there is struggle of whether I should play in chord or play in notes.....now, I used both ways for one song and it just comes spontaneously.