A Complete Guide to Marriage Registration between a Malaysian and a Chinese (register in China first, then Malaysia) - Part 2

September 11, 2011
As promised earlier here in Part 1, upon my return from China, I would blog the rest of the process of the marriage registration between Malaysia and China.  So, here goes:

My husband went to inquire at the China Registration Department (which I do not know what it is called in Chinese) and he took photocopy of my letter of single status and the translated copy which I have emailed him earlier to check with the authorities whether it is sufficient.  He was then told that he needs a translated copy of my passport too!  The tedious part was only the passport part.  At first, I scanned a copy of my passport and emailed to him.  When he printed it out, it was a bit dark, but went anyway to get it translated.  Once he got it translated, he went back to the China Registration Department and the person-in-charge told him that it was too dark and not cleared and they will not accept it.  They told my husband, it's better to take my original passport and do the photocopy, rather than scan and email.  So, my husband have to wait for me to go to China to do that.

When that was done, the next day we went to get my passport translated.  That was quite fast.  It took like 10-15 minutes.  Then we headed to the China Registration Department.  These are the documents needed by them.

My husband (China nationality)
Me (Malaysia nationality)
Both of us just filled up the application form, gave all the relevant documents to the person-in-charge, signed (which to them is to just write my name according to passport) and that't it!  We were married in 15 minutes.  On the spot, we were given the marriage booklet, which is like passport except each one of us get a copy. 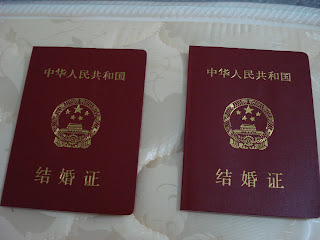 Do check with the local authorities where is the place to register for marriage with a foreigner because I understand that only certain place you can do it.

Now the next process is to register our marriage in Malaysia.  Which I will blog later in November.

Emmy said…
Thank you very much.. I have been searching the process and documents required for a marriage with a chinese man in china. Your blog was a great help when i can't get any other information on google. Thank you very much for posting the 3 parts.
7:03 pm, December 22, 2011

Thanks for reading. I was also searching all over the place to get some info and it was all over the place. So, thought it would be nice to compile everything in one place and share. Glad it help you! Good luck and all the best!
1:40 pm, December 23, 2011

Unknown said…
Hi Yen, may i know the Hukou book need to be original or photocopy also can? Because my girl friend one is in hometown which is very far from the city.
2:02 pm, July 05, 2013

I am not sure if they can accept photocopy. We took the original Hukou book. You might want to check with the authorities.
2:06 pm, July 05, 2013

Unknown said…
wah, fast response, haha. Thanks, as i know we must to go big city to register, since i am foreigner, for local people they can just register in the town, right?
2:41 pm, July 05, 2013

Unknown said…
wah, your so fast response. Thanks, btw we need to go big city then only can register right? since i am foreigner, the small town is only for local people to register?
2:45 pm, July 05, 2013

Yen said…
It depends on which city. The same rules may not necessary apply to all. So, you need to enquire at the local government and find out. Sorry, can't answer.
2:49 pm, July 05, 2013

Unknown said…
Can i translate my passport before go to China, so that no need to waste time in China. Your passport translated while in China is through local government or need to find ppl to translate it?
3:52 pm, July 07, 2013

Yen said…
I translated it in china by one of the authorised translators there because the local authorities wanted it to be translated in china, not Malaysia. They would not accept the translation from malaysia. Only the letter of single status was translated here before I went.
6:33 pm, July 07, 2013

Unknown said…
Hi dear, thanks for your page. I'm getting married end of this year but i have no idea what's the process going to start. Till i have read post. Well, thanks again all of your sharing. :)
2:07 pm, September 11, 2013

Unknown said…
Hi dear, thanks for your page. I'm getting married end of this year but i have no idea what's the process going to start. Till i have read post. Well, thanks again all of your sharing. :)
2:07 pm, September 11, 2013

Wanna ask, which part of China you do your marriage registration? And where you got your passport translated?

My bf stay at Gansu province and the nearest place are only Beijing or Kunming. After all, we decided to register at Kunming because there is only the nearest airport before i transit to Lanzhou, Gansu.

I did it in Foshan. Passport also translated there. Don't worry, the registration in China is quite straight forward and easy, provided you have all the documentations ready, esp from Malaysia is the letter of single status and translated.

After this translate my passport, do I need to legalize my passport before heading to their so called 'JPN'?

I translated mine in China by an agency. It was accepted by 'JPN' in China.

Just wondering what ID you used for your husband when filling in the Single Status Application Form? Is it the PRC passport or the PRC IC? Thanks!
4:41 pm, April 10, 2016

Thanks for sharing with us your valuable experience.
It really help.
May I ask whether can we translate the passport in Malaysia in stead of China?
Hope you got a wonderful life with your family.
Thanks.

I translated the passport in Malaysia but was rejected by the officers in China. So, no choice but to translate in China.
8:38 am, June 03, 2016

Thanks for replying.
Will proceed in China then.

小王 said…
Hi,
May i know the slip that you did with the commision oath required to present in China during registration there?
Or just the single status (both original and translated copy) required?

I am not sure what slip you are referring. In China, I submitted only the single status letter, original and translated, my Malaysian passport copy and translated.
8:48 am, May 08, 2018