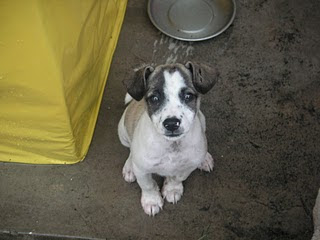 I have a dog.  His name is Madhyam.  In my earlier posts I have mentioned about him.  Today I want to dedicate the whole post to him.

Madhyam was born on 12 December 2006.  He is a mixed breed.  His mom is already a mixed terrier with stray dog and his dad is a pure Dalmation which explains the spots on his body.

From young, Madhyam has shown that he is a very intelligent dog and can learn tricks within minutes and remember them well.  Since he has the Dalmation blood in him, he is a born hunter.  When he goes for walk, he will sniffs the ground like tracking something down.

He knows the command sit, stay, paw, the other paw and my dad has also trained him to sit and not eat his food yet until we clap our hands.  And when he is eating, you can stop him anytime and make him sit again and he won't get angry.

Why I call him the Sahaj Dog?  Because he was being taken care by Sahajis since a puppy.  Besides he has a lot of Sahaj traits in him.  Like, he is fierce but does not have anger in him.  He love being loved.  He is gentle with children.  He shares his food with cats and birds.  He is a caring dog. 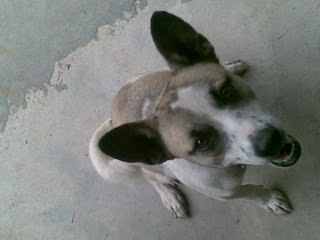 He loves it when anyone massages him.  Just a pat on his head will make him sit still until you are done.

Some days, due to his escapist ways (we tried to keep him in as much as we can but he will chew on fence to get out of the house), we will find our neighbour's bedsheet and slippers on our lawn.  Yes, a bit embarrasing, but hey, it's a dog's life.  Dogs do what they do.

He barks at the postman, garbage man, sweeper and people who puts flyers in our post box.  Sometimes strangers who enters our house (like people who carry furnitures), he will also bark at them.  But he doesn't bark at our relatives and the neighbourhood security guards.  He knows who has good vibrations and who does not.
When he cannot finish his food, he will allow cats to come and eat it.  Sometimes crows too will come and eat his food and he will just lie down quietly and watch.

What I like best about him is this.  Everytime I sit to do shoe beating, he will come to get his massages.  But when he sees my slippers, then he get the message and will sit far far away.  When I do the final raising kundalini and bandhan after shoe beating, he will slowly inch his way towards my hands and while I am finishing the last bandhan he will rest his head on my thighs.  He knows that I have finish shoe beating and now I can caress him.

He definitely makes our lives happier by being around. 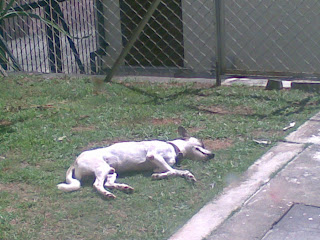