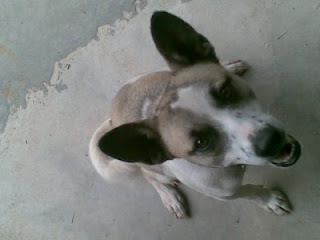 This is Madhyam. In Sanskrit, Madhyam means crane. Ma, short form, is the 4th note in Indian Classical Music, which also corresponse with the Heart chakra. If you read my earlier post, you will know that Lat adopted Ma 2 years ago. And being Lat, the musical one, her dog must also have some music elements. But the real reason why he was named Ma is because of the M on his forehead.
Ma is a mixed breed. His father is a pure dalmation while his mother is a terrier mixed with stray dog.
Ma has got the intelligence of his father. He learnt the basic commands pretty early. He knows only a few commands, sit, stay, down and paw.
Ma is an escapist. He loves to make holes on the fence and run out of the house. But no matter how far he ran, he will always come back. That is the good thing about him.
One day, we found a bedsheet in the garden, a few left slippers and some junk. Ma, in his quest, has brought back our neighbours' belongings. That was last year.
Ma is a good dog nowadays. He seldom venture out. He eats everything under the sun, anything that he can find, from dead lizards, to dead birds. Very adventurous and live up to his name Ma, the confident and brave crane.
Oh, he can also sing. Howls musically. When he was younger, he will stick his ears out to listen to music, especially when Lat is singing.
He loves to be scratched. Under his chin, on his head, behind his ears. He will come and nudge your hand, so that you can scratch him. Very 'manja'.
Many times, due to his adventurous nature, he has got himself stuck. His collar stuck on the fence and was left in rain till Lat came home to rescue him.
I still remember one day, together with his leash, he escape to the vacant yard behind Lat's house and his long leash was stuck in between some branches. He was crying for help and it took us sometime to hear him because it was raining. Lat had to climb over the fence, up the slippery hill and cut off the branches to rescue him.
So, Madhyam, the adventurous one, brings a lot of joy to our lives. He will be turning 2 on 12 December 2008.