on October 18, 2006
I love listening to other people's experiences. It bring so much joy in our lives to see how the Divine touches one another in very different way. So far, of all the stories I have heard, no one has a similar experience as the other.

My 22nd birthday coincided with Shri Krishna Puja in 2001. It was a year after my cousin passed away (see post below). Eventhough I was beginning to see Sahaja Yoga in a different way, understand Shri Mataji a little bit more, know myself a little bit better, but I was not entirely healed. Right after my cousin, June passed away, I told myself, I will never celebrate my birthday again because of the guilt that has taken over me.

Anyway, in 2001, Shri Krishna Puja was held in Seremban, in Aunty Kamala's house. Two weeks before the puja, Vishwanath (harmonium player from Russia) and Pierluca (tabla player from Spain) had come to Malaysia for a visit. Lat and Ramesh had met them in the Nagpur Music Academy and invited them to Malaysia to do a music self-realisation program together with the Malaysian bhajan group. So, Vishwanath came and taught us how to sing, taught us some bhajans, including Mauline Thotavile Daar and Ali Ali Maula Ali Ali. We had lots of fun.

So, after the puja, Vishwanath said we should perform for the collective and we did. We sang and sang, and dance and dance. Then when it was almost midnight, Vishwanath announced that it was my birthday and the whole collective sang birthday song for me. I was very touched. Closed to tears. Felt extremely thankful. Somehow, Shri Mataji has wanted me to celebrate my birthday too.

After all that, I was very hungry. Seetha and I went to the buffet table but there was not much food left. Only little bit of white rice and a lot of gravy. We took it anyway because we didn't have our dinner. When we sat down at a table to eat, we saw a plate, full of food, with vege and meat and fruits, enough for 2 person. No one was taking it. We asked around, and then finally Mohana said, "This is prasad from Shri Mataji. Eat lah!" You won't believe what a full, delicious meal both Seetha and I had. That was the birthday present from Shri Mataji.

From then onwards, all my birthdays were celebrated with the collective. Thank you Shri Mataji. 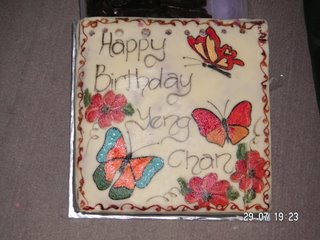