October 05, 2006
A few days after coming back from LA, I dreamt of Shri Mataji. It was a very interesting dream. Actually, the night before, my sister was doing some clearing. She bought 5 coconuts and left it in my room (the altar is in my room) to vibrate. 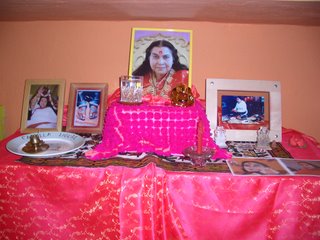 Before I went to sleep that night, I actually felt very scared. Don't know why, just suddenly felt worried and scared. So, I put Shri Mataji's photo under my pillow, raised Kundalini and Bandhan, then went to sleep.

In my dream : It was the Dalai Lama's funeral. The monks has invited Shri Mataji and all the Sahaja Yogis to attend. Shri Mataji came and was sitting on Her throne, looking very majestic and serious. Then, the monks said we should do meditation now. And they did their style with chanting and all that, and the Sahaja Yogis did our own style. After the meditation, it was time for "aarti", the Buddhist style. Everyone stood up and some yogis were mimicking the monks, until some monks came and stopped them. The mimicking was so funny, I started to laugh. The whole time Shri Mataji was looking on at all these actions and just kept quiet.

After that, we went and collected our souveniors. We were lining up and were going around a big table to collect. Some monks were also distributing the souveniors. All the souveniors were photos of Shri Mataji.

Then I woke up. I quickly got up, check the coconuts and found 3 out of 5 has cracked, dhoop the house, clean Shri Mataji's photo and did my morning meditation.

When I was reciting the Ganesha Artharva Sheersha, I felt I was growing smaller and smaller and got lost in space, very dark place with nothingness. The whole time, my attention was on Sahasrara and I felt thoughtlessly aware. The meditation was very deep and vibrations were cool.

I think Shri Mataji was showing me to always be in a witness state and not react and also to be detached. At the same time She was protecting us from whatever negativity that was there.

Gaurav / Robin said…
dreams dreams dreams ..... i personally feel ... How lucky one can be if Her Holiness Shri Mataji herself visit and bless us. really amazing . wat else once can ask for. once u know almighty herself is with u then nothing to worry about, nothing to fear just simply surrender. once we sleep we let ourself surrender in her lotus feet , in her comfort zone giving up all the worries and just praying Shri Mataji i m urs child , plze always keep me withing urs kingdom of love and protection . Shri Mataji Shri Mataji
12:14 am, February 10, 2010